Interview with Kathy Brader of the National Zoo

The National Zoo is on a roll. Last July the city of Washington had their hearts melted by Tai Shan, a baby Giant Panda. In February, the city welcomed another youngster to the Zoo's collection: a North Island Brown Kiwi. Like the panda, the birth of the Kiwi outside its native country is very rare (the last Kiwi born at the National Zoo was in 1975). Also, like the panda, the bird is extremely cute.
I recently swapped emails with Kathy Brader, the Senior Bird Keeper at the Zoo, and she was clearly very proud of her new charge. Like all new mothers, Ms. Brader was eager to swap photos, share the baby's milestones and discuss efforts to preserve the species in its native land (OK, most new mothers don't usually do that last one...). The chick is named Manaia, a Maori work meaning 'Guardian of earth and sky', and is, I repeat, very cute. 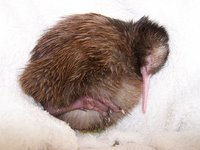 birdDC: If you might, give us a little background on Kiwis and the Island Brown Kiwi. How are they doing in the wild? Why is the Island Brown the only Kiwi that can be seen outside of New Zealand?

Kathy Brader: Wow start with a big one! Here goes. Kiwi are one of the most ancient species of birds, they go back about 39 million years and have only ever been found in N.Zealand. They are flightless with small wings, small eyes (though they do see okay), solid bones and two functioning ovaries. They are called the honorary mammal of NZ. They are the only bird with nostrils located at the end of their bill, and the second best sense of smell of any bird.

NZ is about 89 million years old and the only mammal species that occurred there naturally are 3 species of bats. Man has only been on the islands about 1000 years and they are the ones that introduced mammals.

In 1994 DOC (Dept. of Conservation) finished up with the some DNA work on Kiwi and has discovered that there 5 distinct species of Kiwi and two varieties. This may not be the final word on this, more work needs to be done.

North Island Brown Kiwi (Apteryx australis mantelli) is the only species found in collections outside of NZ. When NZ was ÂgivingÂ out birds as gifts to various governments and zoos the NI Brown Kiwi was the most numerous and most known. When I started working w/Kiwi about 19 years ago there was an estimated 64,000 birds (NI Brown Kiwi) left in the wild, today it stands at about 24,000. They are losing about 4-6% of their population every year and that doubles every decade. Although habitat loss is a factor the biggest problem is the introduction of mammals to the islands.

Kiwi have no defense against mammals, feisty as they are. Dogs are the number one killer of adults, Stoats and cats take the #1 and #2 spot for killing juvies. 90% of all kiwi chicks left in the wild with no protection are predated by 6 months of age. Of the remaining 10% only 5% will make it to two years.

All 5 species (and the 2 varieties) are protected. NI Brown Kiwi are an endangered species. Our recent hatching brings the number of kiwi in the US to 17 birds.

Only 3 species of Kiwi are kept in captivity in NZ zoos. There is a tremendous amount of conservation work going on in NZ to protect all the species.

bDC: Is there anything being done to protect Kiwi on islands with an established population of introduced mammals? Can anything be done? Or perhaps should efforts focus on small, mammal-free islands - as has been the case with conservation efforts for another famous NZ flightless bird, the Kakapo.

KB: Yes the Kiwi has several programs in place including release onto cleaned out islands off shore. There are also large areas on the mainland islands that are fenced in, or areas where intense trapping/poisoning are carried out. Also the program called Operation Nest Egg started in 1994 has proven to be a good booster for populations. This was begun by Dept. of Conservation (DOC) and several zoos (both private and public), local Iwi tribes and paid for by govt funds, private funds and gets a large boost from the Bank of New Zealand (who have the best web site, check it out: (http://www.kiwirecovery.org.nz/Home/). The program removes eggs or chicks from the wild and rears them in captivity to a certain size/weight and releases them back in safe areas, always back to the same area to ensure the genetics are not messed with. This program has been extended to other NZ birds. There is a place in Wellington that was an abandoned water works area (right downtown, built on an earthquake fault line, not a good idea for a dam :) ). Anyways there was this huge area with wonderful trails, woods, ponds, etc, now being farsighted they fenced it in, removed all non native species, except for mice and introduced birds, invertebrates etc back. Lots of native birds came back on their own. They introduced the Little Spotted Kiwi and are now up to over 90 birds, this the first time little spots have been back in the wild on the North Island in 100 years. They have a 500 year plan in place. Its terrific place to bird, local schools use it for nature walks, talks etc. Wonderful place. (http://www.sanctuary.org.nz/ )

Kiwi are used as a flagship species, what ever you do to help them help everyone.

There are captive and wild programs for kiwi. They receive a lot of private support and work very hard to involve local communities in various projects including the local Maori (who consider the Kiwi an elder brother and is revered), remind to dig out the story on how the Kiwi lost his wings.

I am the kiwi advisory to the newly formed Ratite TAG (Taxon Advisory Group, for the AZA). I spent 5 weeks in NZ last year working at zoos, private and public and with DOC regarding different Kiwi issues. It has been very helpful to jump start the overseas group into a more pro active movement to keep Kiwi alive and well for the future in the overseas collections. 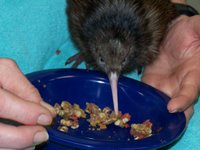 bDC: It sounds like the right steps are being taken. It's wonderful to hear promising news on any bird species, especially one as iconic as the Kiwi. Switching gears to the Manaia, the new chick, how did the birth go? Who are Manaia's parents?
KB:The male is named Maori and a wild caught bird that came to us in 1991 from NZ est. to be about 21 years old. The female is Nessus a San Diego hatch bird (1996) about 9years old. This is the first living offspring for both birds. Manaia is the first kiwi in this country (on her mothers side) that is now a 2nd generation bird.

The hatch was early only 64 days. So a big surprise to us all, and it went like clockwork. The chick must have read the protocol, because she does everything right on schedule (thank goodness). We couldnÂt have asked for a better incubation (except for the hatch being early) and the chicks growth. This morning she was 541grams.

bDC: You say that Manaia is the first living offspring for both of her
parents, yet they are both quite old. Is it common for kiwi to wait so
long to lay eggs?

KB:Kiwi females usually begin to lay about 4-5 years old, males can start
breeding about 2.5 years, though some females have begun to lay about
3.5 years and some males about 2 years. Kiwi live (we believe, time will
tell us more) to about 60 years. This pair has been together for about
3.5 years and in captive situations nott's unusual not to have
fertility till the 3 or 4th season, this seems to be a captive problem,
but not enough research has been done (though research is adding every
year to what we know) yet to tell us about the wild situation. This
female has been laying eggs since she was about 5 years, though the zoo
she was at thought they were all infertile, but again one of the things
I learned last year in NZ was that a lot of good eggs get tossed by
people who do not know enough about Kiwi eggs. In NZ they actually have
two different kiwi incubation classes that they teach(its taught by Dr.
Bassett who is doing a lot of research into kiwi incubation techniques,
egg problems, etc). My goal is that in about 2-3 years to have a US Kiwi
Workshop and to bring in some people from NZ to get us up to speed. They
learn stuff every year over there, but a lot of times publications are
years behind.

bDC: What's the future for the chick? Is she going to stay with her
parents at the zoo or is she destined for somewhere else? and;
Who got the choice job of picking the chick's name?

KB: Her name represents a 1/2 bird 1/2 man spirit being who is a messenger to the gods. I picked out a bunch of Maori names and we (with input from the very top) picked that one. Some NZ friends of mine touted it around to some Maori friends of theirs and they all thought it was a great name. They thought what a great name for a bird that is representative of her species to our species. We are eventually go to set her up at the Conservation and Research Center in Front Royal VA (its the zoos offsite area for different endangered species). Eventually when she is at least 3 years old we will introduce a male to her (and hope they like each other). And no problem with all the questions, I do LOVE talking about Kiwi and esp. our newest special girl!