Port Mahon Road and Bombay Hook, Delaware: All For Knot?

For birders, the annual horseshoe crab spawn on the coast of Delaware and Maryland is a must-see. Each May thousands of pre-historic, creepy looking crabs lumber up onto coastal beaches, mate, lay eggs and die. And stink. Thousands upon thousands of shorebirds, who are in the midst of their long and tiresome migration, rely on the horseshoe crab eggs for fuel and make the spawning an important pit-stop on their flight.

One of these birds is the Red Knot, a plump little shorebird that, unfortunately, has been serious decline. Part of the problem is the horseshoe crab harvest that has reduced the numbers of crabs spawning on the beach (and which recent action in Delaware has addressed). Another part, and a much harder one for people around here to do anything about, is hunting and pesticide use in South America, where the Knots spend much of their time.

So I left Memorial Day morning and headed to the coast of Delaware to see some shorebirds and hopefully catch sight of a Red Knot or two. I had missed the peak migration, apparently, by a couple of weeks...but I certainly couldn't tell by the sight and smell of the beach. What an incredible scene. Port Mahon Road, once it gets to the beach, is a very bumpy street separated from the water by a narrow (like, 10 foot) beach. After passing stands of marsh grass, the road runs for only about .5 miles before dead-ending at a parking lot and public boat launch. On this stretch, though, were thousands of shorebirds.

I should say here that I got my first life bird of the day as soon as I opened my car door along the marsh stretch before the beach. Although I had never heard one in person(only on cd), the rapid song of the Marsh Wren was instantly recognizable. Before the day was over I would hear, and see, probably 50 of these little guys.

I smelled the beach before I could see it and instantly knew that some animals were rotting. The horseshoe spawn is pretty sad, as the crabs do their business and then just wait to die...but they don't go easy. The lie on their backs and flick their little legs and bob their tails slower and slower. When you poke them they get a sudden burst of energy but eventually just fade away. The birds like it, though. The shore was crowded with thousands of semipalmated sandpipers. Mixed in, with varying degrees of ID difficulty, were ruddy turnstones, herring, laughing and greater black-backed gulls, Willet and white-rumped sandpiper (both lifers...I was particularly proud of my WRS ID...which wasn't easy, especially when you're trying to pick an individual bird out of a swarming mass of look-alikes). There were no Red Knots around, but a salty old birder with a big ole beard said he had seen two just before I arrived. Obviously.

It was high tide, and the best birding was at low tide, so I drove about 10 minutes to Bombay Hook NWR. It was here, about 5 months ago, that I had seen another amazing spectacle: the snow goose arrival. That remains probably the greatest wildlife spectacle I've ever seen. Anyway, I checked out the sightings book at the welcome center and someone had seen a pair of Wilson's Phalarope just minutes before! They were in Bear Swamp, all the way across the refuge, and I drove as quick as I could to get there. Yup, as I expected, couldn't find them. The birding was great, though. At bear swamp I watched an American Bittern hunt fish in plain sight, a family of black-crowned night heron, some late semipalmated plovers, my lifer Black-Necked Stilt (I was a little disappointed in how small they were...but very cool birds) and many herons and egrets. It's amazing how much the birdlife changes...where once were thousands of ducks and swans there were now hundreds of sandpipers and stilts.

Back at Port Mahon for low tide, the numbers of pipers, plovers, willet, turnstone and everything else had increased. Even a pair of my beloved american oystercatchers showed up and put everyone to shame with their classy dress. But, alas, no knots. I was fooled a couple times by some short-billed dowitchers, which are like colored, but it wasn't meant to be. I had a wonderful time, though, tallying 68 species and 4 lifers. I'll be back next year, where hopefully Red Knots will make a better showing with a more stable population.

How to Impress Girls

I am a huge fan of BBC nature documentaries hosted by David Attenborough. I can't get enough. I stumbled upon an episode of Blue Planet one night in college and couldn't look away for the entire show. I immediately went on Amazon.com and bought the whole set (you should too, honestly).

When I got heavily into birds, one of the first things I did was buy, sight unseen, the entire BBC's Life of Birds series. Like the other BBC/Attenborough series, LoB covers animals from all over the world and in several different categories covering different types of birds and issues in the life-cycle of birds. There are some amazing shots (especially the out-of-control Asian eagle battle...you have to see it to believe it), and the series reveals things about common birds that I never knew before. Most memorably are the segments on Brown Pelicans and Common Moorhen ignoring and/or killing their own young to make way for more dominant siblings. It's intense and incredibly interesting.

Another segment features an interesting note on some common birds that you, gentle DC reader, have most likely seen today. In fact, I GUARANTEE that if you live within 10 miles of the District of Columbia and have opened your eyes today, you've seen this bird. It's the House Sparrow!

Attenborough told me, in his delightful accent, that the black bib on male house sparrows is more than just a decoration, but is in fact a symbol of a hierarchical system within each House Sparrow group. Simply, the bigger the bib, the more dominant the bird. It's pretty interesting.
Compare the bibs on the birds in this photo: 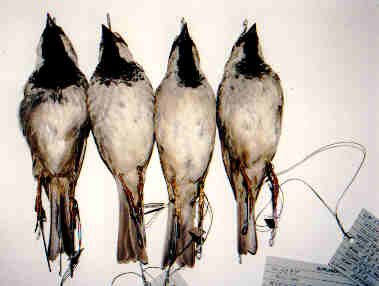 It turns out that the bib size is more than just a decoration, too. Borrowing liberally from and excellent House of Bird Research page, I can tell you that a large bib corresponds with a large set of testes (which give a better chance at fertilization) and a better immune system (which are also a genetic benefit). So there you go. Sparrows with larger bibs are healthier and studlier, and so get all the females and are generally more awesome.

The moral of the story is: instead of being annoying and complaining about how every bird in DC is a house sparrow, you can now impress girls with your ability to instantly compare House Sparrow testicle sizes. I'm pretty sure that's how my parents first met, I'm sure it'll work for you too.  ¶ 10:02 AM 0 comments

The Awesome I and the Bird #24

The chaos of hosting the previous I and the Bird blogging carnival combined with my being away from DC prevented me from submitting a post to the next IATB edition. Big mistake. Carel from Rigor Vitae: Life Unyielding has published a FANTASTIC edition, complete with hand-drawn and painted illustrations for each submission. Curse my busy schedule!
Check out IATB #24 or Carel Brest Van Kempen's incredible artwork site.  ¶ 12:12 PM 0 comments

Apologies for the tardiness. I just got back to DC after a splendid week at Hamilton's graduation and finished my first day working at The Wilderness Society. Things have been hectic but I am rededicated.

Birding in NY was disappointing. It was windy, cold, overcast and rainy (and snowy and hail-y) the whole week, and my attempts to find the Northern Goshawk and Red Crossbill were unsuccessful. I'll post in more detail soon.

Another venture yesterday for a Lark Sparrow at Kenilworth Park was also unsuccessful.

This weekend I think I'm going to ride out to Delaware to find some shorebirds and, hopefully, a red knot. Stay tuned for that.

One cool thing: I was sorting through some pictures I took at the Arboretum a few weeks ago and came across a picture of a Ruby-Throated Hummingbird on its nest. One of the pair took some swoops at me while I was walking by and (ironically) tipped me off to the nest. It rests on a branch of a tree, I think its a sweet-gum, that's about 25 feet up into the gardens from the road. To find the nest, walk up from where cars sometimes park (and where a security guard stands) and find the branch that crosses the path across from a bench. It's tiny, and very cool.

The Rain in Maine Stays Mainly...Everywhere

I have been out of the district for a few days now for my girlfriend's graduation and it's been a welcome break. Yesterday we made the drive to Portland to hang out, see my family and look for some birds. The problem is, and you'll guess if you've seen the news in the last few days, is that Maine and the rest of New England are in the midst of a week straight of rain. On the drive up every single river and stream was flowing over its banks. It rained all last night (through the nice dinner and drinks) and most of today, and the forecast calls for another 5 days.

Despite the weather I made quick stops at my favorite Maine birding spot, Evergreen Cemetery. As expected, the rain kept most things down, but I did see my first-of-season Spotted Sandpiper, Ruby Crowned Kinglet and my Maine first Baltimore Oriole. I'd love to be here the day after the storm passes for the wave of migrating warblers that will follow.

Anyway that's all there is to report. Later this week I'll hopefully have some Goshawk and Crossbill stories. Stay tuned.  ¶ 4:00 PM 0 comments

And the winner is: Paul Ollig from The Rambling Ranger! Paul scored a whopping 25 out of 27 correct answers to win his choice of a Peterson Field Guide. Congrats.
This has been a lot of fun. Thanks to everyone for playing, and for coming to check out birdDC and IATB#23. Special thanks to Mike Bergin for his assistance throughout.

I am leaving DC for a week to hang out with my girlfriend in NY before she graduates. Along the way I will be birding my favorite spots in Maine and Central NY, including trips to find my arch-nemesis birds: the Red Crossbill and the Northern Goshawk. Stay tuned.

Now on to the answers!

5. Wild Turkey, Oxford, NY (it was doing a Killdeer-style distraction)