I'm leaving for Aspen on Saturday, and, with so much family whatnots between now and then, today was pretty much the last time I would get to scour the Maine coast for some birds I 'aint never seen yet. My targets were winter oceanic species: great cormorant, king eider, black-legged kittiwake and another winter species, the lapland longspur. I would have also been delighted to see any number of even less common pelagic or passerines.

I started by driving down to a new favorite spot: Dyer Point in Cape Elizabeth. This little spit of land in the middle of Two Lights State Park (literally, Dyer Point is between two lighthouses) is further out to sea than anything else in the Portland area, and is, apparently, the best place around to see the pelagic species I was looking for. I had visited a couple times earlier and seen lots of cormorants (all double-crested) and close-to-shore gannets. Reports of kittiwake were common...but I was disappointed in the lack of birds today.

I did have a great sighting of harlequin ducks, however. I had never seen males before, but I recognized them instantly when a small group of 7 (5 males, 2 females) drifted by close to shore. The males really were beautiful, unfortunately I had my camera on the wrong setting and the pictures didn't come out.

Then off to Biddeford Pool, a legendary Maine birding spot. Outside of Biddeford the land sticks way way out into the ocean and ends with a small piece of land surrounding a tidal pool. Biddeford Pool attracts all kinds of birds in all seasons...but, again, not the onces I was looking for. The best sighting of the day was, by far, the immature black guillemot I found on the calm waters of the pool (not, as one would expect, on the open ocean). The bird was just a few feet away from me at the side of a dock, and I was able to get good pictures: 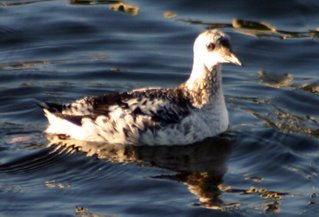 And of a horned grebe: 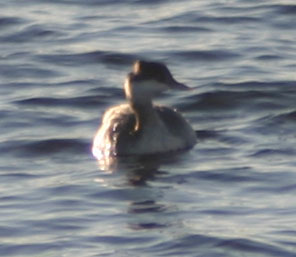 So no luck. There's a chance, albiet much smaller, that I'll see some of these birds on the Great Lakes. If not, I'll just have to come back to Maine, which is fine with me.

So, I'm off on Saturday and I'll try to find the scissor-tailed flycatcher in NH and the green-tailed tohee in Mass. on my way out. I'll keep you posted.  ¶ 6:22 PM

Comments:
Great pictures! The gut at Pines Landing is a great place to bird watch at this time of year. (The Gut is where the Pool empties into Saco Bay.)

I am off to find the Ash-Throated Fly Catcher reported in Saco.

Great pictures! The gut at Pines Landing is a great place to bird watch at this time of year. (The Gut is where the Pool empties into Saco Bay.)

I am off to find the Ash-Throated Fly Catcher reported in Saco.