Well what can I say, I've been neglectful. I've been in Aspen for almost a month, and I haven't updated the ol' bDC since I've arrived. The big problem is that it seems a little weird to continue with a Washington DC blog while I'm in Colorado, so to remedy that I've established a new blog:

Now, the Birdist is still in its EARLY stages, but be patient. Until it's ready, let me give you a little update on what's been goin' on.

-The trip across America wasn't as birdy as I hoped it would be. It was dark when I drove by Montezuma. Niagara Falls was freezing cold and I didn't see anything special. I got food-poisoning in Jackson, Michigan. I saw some snow buntings and gulls on Lake Michigan...

-Things got a lot cooler when I got into South Dakota. The Badlands National Park was one of the weirdest and most interesting places I've ever been. It's basically a bunch of eroded cliffs along a transition from high prairie to low prairie. It's very wild and remote and a great place to drive around in alone. I saw mule deer, bighorn, pronghorn (they're awesome), wild buffalo (they're scary) and my life Townsend's Solitaire and (the huge and lovely) golden eagle. I also saw 2 (!) northern shrikes just outside the park. 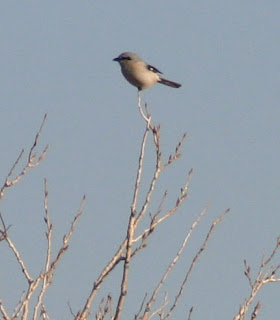 -Thanks to a tip from the CO-Birders list on birdingonthe.net, I found a yellow-billed loon outside of Denver. It was an amazing bird, and one very rarely seen in Colorado, but the whole incident was a little sad. The bird was in a small suburban reservoir and had confined itself to a small pool of open water only a few feet in diameter. Several of the CO posters assumed that the bird was sick or injured. Indeed, a few days after I saw the loon in its pool it was found dead.

-I've seen 5 new birds since I've been to Aspen. The first two are boreal birds that have escaped me many times: pine siskin and my former arch-nemesis, the red crossbill. On my first day working as a mountain photographer at the top of the Gondola in Aspen I found both these birds (100+ siskens and 30+ crossbills) feeding on the rock wall just below the famous SunDeck. Since then I've seen crossbills, the bird that eluded me so many times at the New Michigan State Forest in NY, almost every day. Also on top of Aspen (and Buttermilk, where I work more frequently) are small gangs of gray jays so tame that I've fed them pieces of cookie that I held between my teeth.

-I've gained some respect for two birds that are common here, the Common Raven and the Black-Billed Magpie. I've only had glimpses at Ravens in Maine, and to see them cruise on thermals and dive like bullets in strong winds is truely impressive. Magpies, on the other hand, are simply on of the most beautiful birds I've ever seen.

-I participated in the Aspen Christmas Bird Count on Dec. 17th. Aspen has only a small community of birders, and only 6 could make the count. One of these birders, to my complete surprise, was Al Levantin, one of the subjects of a novel that I credit with introducing me to the world of listing: Mark Obmascik's The Big Year. Mr. Levantin lives near Snowmass and his house is said to be the best place in the world to see the Brown-Capped Rosy-Finch...here's hoping I'll get invited in!
Anyway, I was paired up with a local birder named Ken Toy, and our search area was the town of Aspen down to Woody Creek. Along the way I found I saw three lifers: Western Scrub-Jay, Stellar's Jay and the American Dipper (and 3 Red-Shafted Flickers). Dippers are really impressive birds. Ken and I watched for about 10 minutes as the little bird literally jumped into a stream and struggled back upstream to it's rock perch.
All in all, we tallied 22 species...the most of the three Aspen CBC groups and a pretty durn good tally for Aspen in the winter. We even beat Al Levantin (no Rosy-Finches showed up at his feeders)!

-OK that's it for now. I'll keep my eyes peeled for other Aspen-area species (rosy-finches, white-tailed ptarmagin, prairie falcon). See you at the Birdist.

I run a site called BirdwatchingBlog.com and wondered if you would
like to exchange bird watching links? I've already linked to your
site, and if you would like to return the favor, my blog info is:

Thank you in advance for your consideration. :)