On Thursday I made a whiny post about how I wasn't having any luck finding Blue Grosbeaks or Vesper Sparrows at Kenilworth Park. Well I tried again today and Kenilworth rewarded my determination with an amazing moment. But I'll get to that in a moment.

I started off the morning by hitting up the Azalea Gardens at the National Arboretum, where John from A DC Birding Blog consistently finds awesome birds. And he's onto something. The place was crawling with birds, although the expanding foliage made it very difficult to see what I was hearing. By far my biggest flaw as a new(ish) birder is my lack of mastery of bird songs, but, hey, it'll come. Despite that, I had a great time and saw many first-of-the-year birds including: Veery, Wood Thrush, Red-Eyed Vireo, Ruby-Throated Hummingbird, Black-Throated Blue Warbler and the lovely Baltimore Oriole. After leaving the Azalea Gardens [and later getting a listserv email from John who had been to the same spot that morning and seen way more birds, including my target Hooded Warbler. Outsmarted again!], I swung through the Research Orchard (is that what it's called? Down below the Columns...) and caught my year's first Indigo Bunting before leaving for Kenilworth. 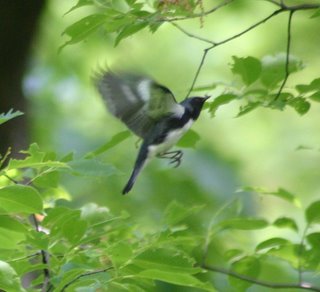 Arriving at Kenilworth I abandoned hope of finding the Vespers because of the soccer games that were taking place on the fields. No matter. I made for the back section, beyond the barriers, where I had seen at Blue-Winged Warbler a few weeks ago. After taking an immediate right and heading up, and then down, the hill next to the stream, I stood on a dry pond-bed and looked at the dense foliage above the stream. A long, brown bird hopped up into view. At first sight I thought it was a Thrasher, but the bird turned to reveal a clean white belly and a red eye-ring - a Black-Billed Cuckoo! While I kept the bird in view, relishing my first ever sighting, another bird landed on a branch just behind the Cuckoo and hooted softly like a Cardinal. I focused my eyes and recognized it as a blue bird with red bars on its wings...a Blue Grosbeak! WHAT! I was looking at two life birds in one raise of the binoculars. Unprecedented. They stayed in place for me to snap some pictures, although the Grosbeak is hard to make out because it was further back and in the shade. Take a look: 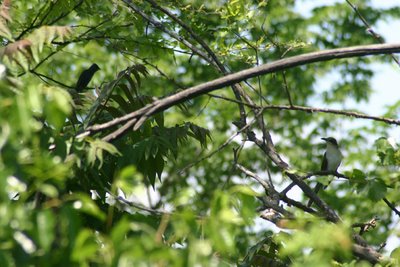 Fantastic. After that sighting I'll never talk smack about Kenilworth again. I didn't see much else...couple Yellowthroat, some more Indigo Buntings and, later, a female Grosbeak. A quick stop at the Aquatic Gardens brought nothing to speak of besides a Parula.

Comments:
Congratulations, those are two great birds! I am not sure I have ever seen a BB Cuckoo, though I have heard one on a couple occasions. I'll have to check that one out.

Great picture of the black-billed cuckoo!

Two lifers in one shot - sweet!